Galleria Continua opened in San Gimignano in 1990, at the initiative of three friends – Mario Cristiani, Lorenzo Fiaschi and Maurizio Rigillo. Its headquarters occupy the spaces of a former cinema, in the historic centre of the town of San Gimignano. A timeless location, allowing development of new forms of dialogue and symbiosis between unexpectedly contrasting geographies: between rural and industrial, local and global; between art of the past and today, and emerging and established artists. Galleria Continua was the first foreign gallery with an international programme to open in China, in 2004, and three years later, in 2007, it inaugurated a new special site for large-scale creations in the Parisian countryside – Les Moulins. In 2015 the gallery embarked on new paths, opening a space in Havana, Cuba, dedicated to cultural projects aimed at crossing all frontiers. In January 2020 it celebrated thirty years of activity, inaugurating a new exhibition venue in Rome that includes artists’ residencies and educational activities as well as a new space in São Paulo. 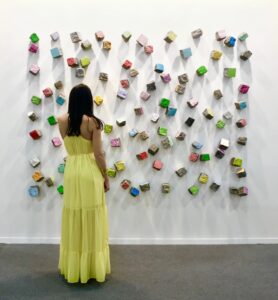